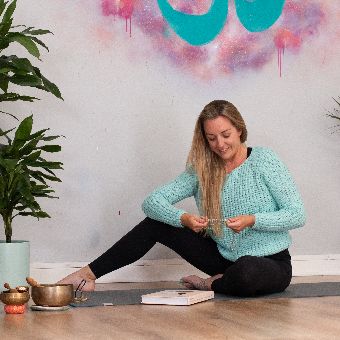 Christie Harley
Christie began her yoga journey as a teenager, using yoga as a way of warming up and cooling down the body before and after dancing classes and performances at school. She always loved the sun salutations as they were so fluid and opened the entire body. She carried on experimenting with Yoga postures and breathing techniques throughout university and her years at work. However, It wasn’t until 2017 that she found her true identity and took the plunge into teaching Yoga. Yoga was a great escape from work and other things in life that she felt weren’t right. It made her feel at ease, centred and relaxed. In the summer of 2017 she left her career and travelled to Bali to train as a Yoga instructor. She taught in and around Morpeth in community halls and spaces, until opening Yoga Den, (the first Yoga studio in Morpeth) in January 2019. In 2020 she completed her advanced teacher training in Yoga Therapy with a world renowned Yoga Therapist Antonina Ramsay. Yoga therapy looks at the needs of the individual and creates a tailored approach to Yoga. Since qualifying in summer 2017 Christie has taught over 2000 hours of private and group Yoga classes, and continues to love teaching and creating new and exciting classes at Yoga Den. Christie’s intention has always been to bring inclusive classes, workshops, courses and retreats to Yogis at an affordable cost, using the original philosophy of yoga as a business model. Yoga is not a luxury, it is for everyone and can be part of daily life. See you on the mat yogi Namaste xx
Read more
Book now

Please join Christie for an extended yin yang yoga practice in the studio followed by brunch at “Sober in the Garden”.
Our extended practice will include a yin yang session, breath work, a guided meditation and journaling prompts.
Please purchase a yoga and brunch credit and then book into this class.
Class will begin at 830am finishing at 10am when we will walk over to “sober in the garden” for brunch.
This is open to everyBODY.
Share this class Add to calendar