Check Your Language: How to Keep Your Teaching Fresh

We all get bored of our own voices sometimes. When you’re teaching regularly, you’ll inevitably fall into certain habits, and find yourself using the same words or phrases over and over again. It’s normal — but if you can stay aware of your language choices, you’ll be able to make changes that will improve your teaching and deepen your students’ experience.

It’s not that there isn’t a time and a place for repetition. But this blog post will look at why it’s so important to check in with your language use, and explore new ways of communicating ideas and cueing postures, instead of sticking with the same old comfortable techniques.

From a yogi’s perspective, fresh language is important because it’s hard to truly hear what a teacher is trying to say if they say it in exactly the same way every class.

The first time a teacher says something, students listen to it. The second time they say it, students hear it. The third time, and each time after that, it becomes…diluted. Automatic. The brain has a tendency to go into autopilot and skip over the familiar; so a cue that’s repeated over and over just becomes white noise.

How many times have you heard a yoga teacher ask you to reach your heels towards the mat in downward facing dog, or engage your core muscles in the forearm plank?

And can you think of a time when a teacher has used a completely new way to cue those actions — and it’s clicked, and you’ve felt a difference in your body?

For example, maybe they said “pull the tops of your feet towards your shins” instead of telling you to reach your heels down. Or they talked you through a different way of entering forearm plank, lifting first your head, and then your chest, and then rolling up your ribcage and stomach before finally lifting your hips — which meant you had no choice but to go into the posture with core muscles engaged, instead of just telling you to engage them.

When you’ve identified the language you use most frequently, come up with a few different ways of saying that thing.

It’s also crucial to remember that different language works for different people. A cue that clicks immediately for one student won’t necessarily make any sense to someone else. A student once approached me after a class, having been coming to that class for well over a year, and said “what do you actually mean when you tell us to ‘soften our shoulders’?”

I’d been using that cue regularly because it made perfect sense to me — but this student felt no physical connection with the concept of ‘softening’ in the shoulders, and had never really understood what it meant.

If you mix it up and use different ways of cueing the same movements or postures you’re much more likely to say something that speaks to each student in the room. You’ll also give your students the opportunity to explore familiar postures in more detail, or in new ways, which helps them to stay present and feel what’s going on in their bodies — rather than falling into the habit of just going through the motions.

How to practice language awareness while you’re teaching

As with most things in yoga, the key is to notice.

Choose one or two of your classes each week and make a conscious effort to notice the language you use, and how often you say certain words or phrases. After those classes, note down the language you repeated frequently. You might be using the same cues all the time, or you might have developed habitual filler language that you use to fill the silence.

Lots of teachers say something along the lines of “now we’re gonna…” before giving a cue. If this sounds familiar in your own teaching, how would that cue change if you simply gave it without the preface? It might make the cue more direct and effective. Others might use the same words to encourage students — like “nice”, or “beautiful,” — and after a while, that praise starts to sound empty. How would your classes change if, instead of throwing in those words, you gave more specific praise based on what you’re actually seeing in your students’ practice?

When you’ve identified the language you use most frequently, come up with a few different ways of saying that thing. Or in some cases, just make a commitment to not say that thing — cutting out unnecessary, habitual language has a surprisingly big impact on the overall journey of a class.

In your own practice, move through postures and movements slowly and think about how you could describe the details of those movements to give yogis a different experience of them. And then use those descriptions in your classes.

Don’t be afraid to ask for feedback

Last but not least, consider asking your regulars for feedback on the language you use in class. You could give them a way of doing this anonymously, or ask them face-to-face. Chances are they’ll know exactly which words or phrases you’re in the habit of repeating all the time, and they’ll be able to tell you if there’s anything in particular you say that they don’t understand, or that distracts them from their practice.

Being open to constructive feedback, and willing to ask for it, is one of the best things you can do to make sure you keep learning and improving as a yoga teacher. Check your language, try something new, and reconnect with the purpose of your teaching. 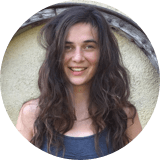 Izzy Arcoleo is a yoga teacher and writer based in London. She’s passionate about drawing together physical yoga practices with yoga philosophy and anthropological theory to create practices that are inspiring, supportive and fulfilling.

How to Stay Inspired in Your Yoga Teaching

In the early days of teaching yoga, it’s easy to stay motivated. You’re fresh from training, and bursting with new knowledge and ideas that you want to share.

5 Tips on How to Network with Other Yoga Teachers

Meeting new yoga teachers gives you the opportunity to deepen your practice and explore yoga from different perspectives.

7 Tips to Help You Ground Yourself Before Teaching

This article not only helps yoga teachers ground themselves before teaching, but also improve their own lifestyles and bring peace of mind to every breath.

How Yoga Can Be Used to Support Your Community

Our practice can be such a positive force in our personal lives and can be expanded to make a positive impact on our communities.