We recently started our journey through one of the foundational texts of classical yoga philosophy; The Yoga Sutras of Patanjali. We began discussing the Eight Limbs of Yoga – Patanjali’s path towards self-realization and enlightenment. And we saw how it can be a great inspiration for us, both in the way we teach and in the way we practice ourselves.

Taking this path step by step, we got to talk about the first three limbs; the 5 yamas (ethical guidelines), the 5 niyamas (inner observances) and asana. Now we’re halfway through and it’s time to have a closer look at the fourth limb; pranayama.

Pranayama is related to the flow of prana – our vital force, the energy that runs through our body. There are two interpretations regarding the word’s etymology. According to the first one, pranayama comes from the words prana and yama, which means control or restraint. According to the second one, pranayama is divided into prana and ayama, which means liberation, the exact opposite of control.

Practicing pranayama involves a number of different breathing techniques that have different benefits and aim at different results. Some of them are used to bring balance and calmness, some cool or heat up the body, while others have a cleansing effect. And the truth is that pranayama has become synonymous to these breathing techniques. However, it is much more than this.

Patanjali has dedicated five sutras to describing pranayama as part of the eight limbs of yoga. Let’s have a closer look! Maybe they’ll inspire us to start experiencing and teaching pranayama in a different way.

Or, in our words, once the perfected posture (asana) has been achieved, softening the force behind the unregulated movement of inhalation and exhalation is called breath control and expansion of prana (pranayama), which leads to the absence of the awareness of both, and is the fourth of the eight limbs.

In the first pranayama-related sutra, Patanjali suggests that when the steady and comfortable asana is acquired, pranayama follows. It is about slowing the effort behind the breath and consciously regulating it. Through that slowing process, awareness of prana expands and concentration deepens - Until a point where awareness of prana is overcome too and we reach a deeper state of meditation.

How? Well, as you might have already guessed, there is no user manual here. It's more like what K. Pattabhi Jois once said; "Practice and all is coming".

The next sutra takes us one step further. It presents the three aspects of pranayama; the inhalation (inward flow), the exhalation (outward flow) and the transition between them (absence of flow, suspension or retention), and it suggests that they are regulated by place, time and number, with the breath becoming slow and subtle.

In class, the three aspects of prana and breath are being trained through various breathing techniques. We train to make the inhalation calm, the exhalation slow and deep, and the transition (the pause between inhalation and exhalation or exhalation and inhalation, where one is neither inhaling nor exhaling) smooth.

Wondering how you can introduce this yoga sutra to your students? Well, just start with teaching breath awareness.

Invite your students to take their seated posture and take some time to make it as comfortable as possible, without hesitating to use any props they might need. Encourage them to witness the three cycles of the breath in the three ways Patanjali suggests. You can ask them to focus on their breath moving up and down the spine or in and out the nostrils or bring their attention to their navel, between the eyebrows or to the center of their heart. Different points of attention will bring different experiences. Ask them to observe what arises. The duration of the exhalation, the inhalation and the transition can also be consciously regulated. You can ask your students to gradually increase the duration of their exhalation, or the pause after the inhalation or the exhalation, if that feels ok. Or encourage them to count the number of seconds their inhalation and exhalation lasts.

These practices aim at making the breath slow and subtle. And your students will find it very helpful to keep in mind that this is the main goal, regardless of the specific technique that is used. 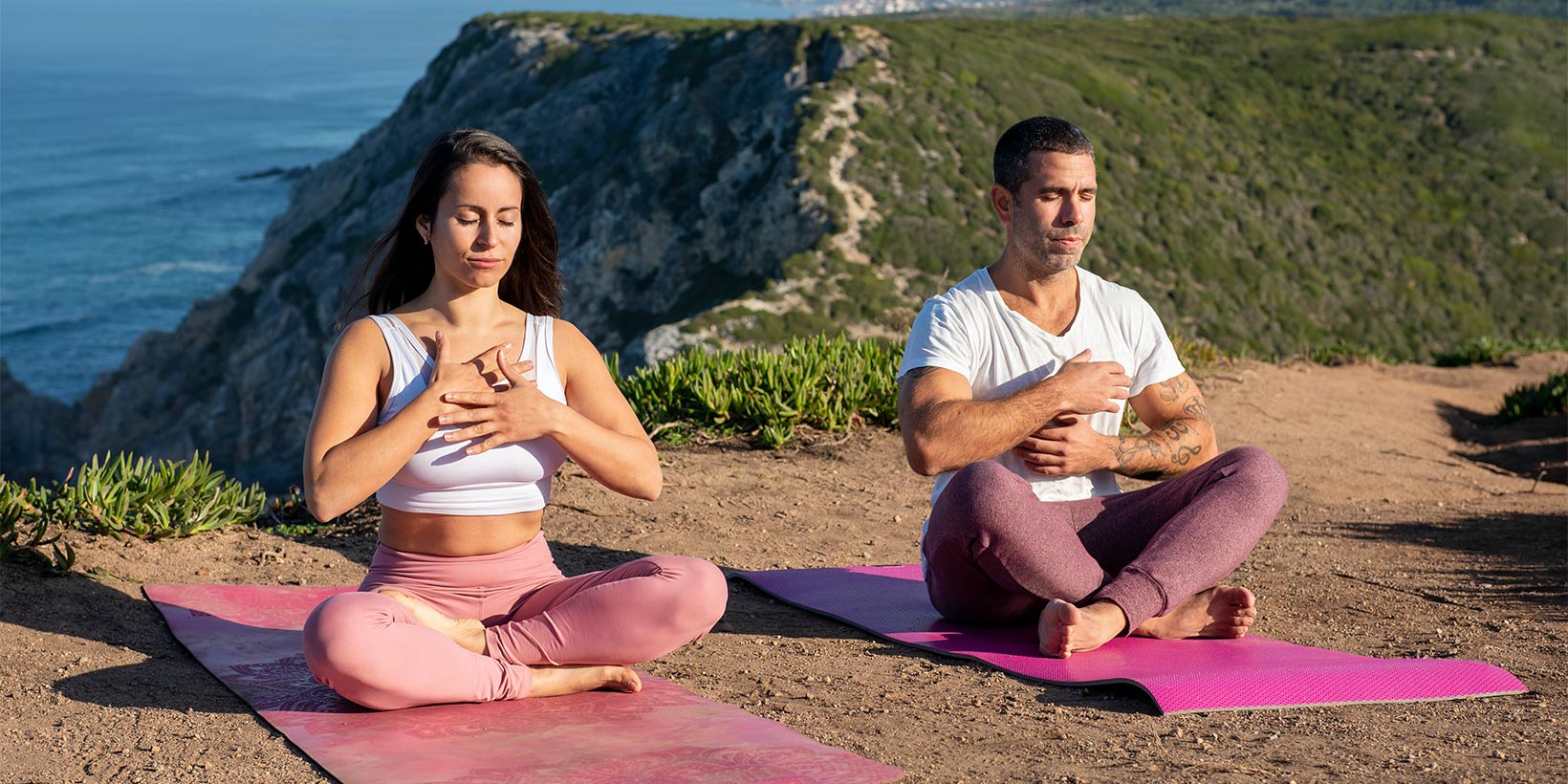 In the next pranayama-related sutra, Patanjali suggests that the fourth pranayama is that continuous prana which is beyond the three aspects we know as inhalation, exhalation and transition between those.

It is the process of transcending breath as we know it, to unfold the energy of the pure prana that is underneath. To experience the prana itself as an ever-existing force. And this comes after working with the three previous aspects of pranayama, as well as the three previous steps in the eight-fold path of yoga at the same time.

The truth is that you can’t really teach this sutra. It's more about an individual experience. But as one practices breath awareness and regulation, they will sooner or later discover a new sensation that is so subtle it can’t be easily described with words.

Patanjali has devoted this and the next sutra to explaining the benefits of pranayama. In sutra 2.52, he claims that through the fourth pranayama, the veil of karmasheya, which covers one’s inner light, diminishes and vanishes.

The concept of karmasheya is introduced in previous sutras and it basically refers to a repository of latent impressions that are formed as a result of previous actions (karma). The impressions in this repository are called samskaras, and they rise, causing more karma, which in turn leads to stronger samskaras.

According to this sutra, the repeated practice and experience of the fourth pranayama – the pure, ever-existing life force – makes the veil of karmasheya gradually disappear. That is, it helps one change the cycle of their karma, break the patterns in their actions, and let their inner light shine unhindered. Sounds promising, right?

Moving on, sutra 2.53 suggests that through pranayama practice, which is the fourth of the eight steps in the path of yoga, the mind develops the capability for true concentration (dharana), which is the sixth step. Patanjali here implies that pranayama leads to the withdrawal of the senses (pratyahara), which is in fact the fifth step in the eight-fold path.

Or, in other words, pranayama prepares us for what will come next – the culmination of yoga practice!

Patanjali’s approach to pranayama and its benefits offers us a whole new perspective on the breathing techniques we practice ourselves or use during class. The moment we are in a seated posture practicing pranayama, we are a little closer to calming the body and the mind. A little closer to breaking the patterns in the way we act. A little closer to bliss. Isn’t it worth trying?

Magda Chatzinaki is a writer and yoga teacher, on a mission to spread the bliss! She believes that there is great joy in the little things in life. When she’s not writing or practicing yoga, she’s probably somewhere biking, enjoying nature or hanging out with her loved ones.

The Principle of Ahimsa: Incorporating Yoga Philosophy Into Your Class

Draw inspiration from the rich tradition of yoga and offer your students a memorable yoga class based on the principle of ahimsa.

The Principles of Satya and Asteya: Incorporating Yoga Philosophy Into Your Class

Get inspired by the rich yogic tradition and philosophy and offer your students a yoga class to remember, based on the principles of Satya and Asteya.

The Principles of Brahmacharya and Aparigraha: Incorporating Yoga Philosophy into your Class

Follow me to a journey into the philosophy and tradition of yoga and create a unique yoga class based on the principles of Brahmacharya and Aparigraha for your students to remember.

These different beliefs from around the globe, each with a seed of knowledge to impart in our practice, will later filter on how we handle our careers. Read on and find out how!